This month our club kit was from Joni.  It was full of so many goodies from washi tape, which I mostly saved for later, to die cuts and great stamped sayings.  The kit was perfect as I really needed to start working on my Christmas cards.  This year I am going to go outside my comfort zone and send everyone different cards.  Well maybe not all different but everyone will not be getting the same card this year.  Not after you see what I did with the kit.

So here is the kit Joni sent us 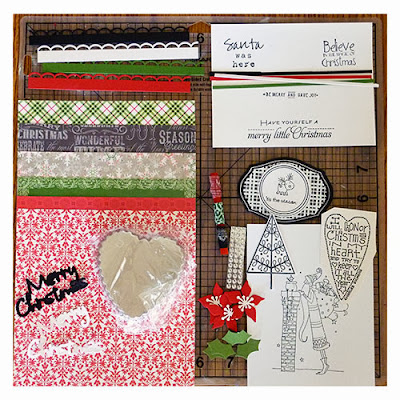 And here are the cards

Here they are individually:

The paper on this one was perfect all by itself I really didn't want to distract from the pattern.  Because the paper was 6 x 6 it of course was not long enough to cover the card in it's entirety.  So I took a scrap piece and put that along the side.  I also used my new Ephipany tool to create those adorable Santa heads.   I made the image extra large so you can get the full effect.

On this one I liked the paper as well.  So I added the border that Joni punched out along the bottom of the card and then a little above that put a small strip of black cardstock with the Merry Christmas washi tape just below.  This kept it lined up nicely.  The little deer was part of the kit as was the tree.  The christmas tree I covered with distress glitter and then dotted some stickles to make the different colored ornaments.  I used a sparkle pen on all of the black to outline but it didn't show up in my picture.

For the last one of this set I used some of my Spellbinder dies to cut out an ornament which I then stamped a cute little image from Unity that I just purchased.  How adorable are they!  I colored them in with my distress markers.  The patterned paper from the kit along with the saying in the corner I used another Spellbinder die that is distressed.  And you know how I love things that are distressed.

This next one frustrated me.  The die was in the kit and Joni embossed the white design.  I stamped the Merry Christmas but used a distress pad which was a mistake.  I thought I had it all off the die and stamped it again with versamark.  When I put the embossing powder on the die I realized my error.  I removed as much of the powder as I could but the image is not crisp at all.  I like to think that it looks like it is snowing.  Again because the paper is 6 x 6 I used a piece that was trimmed off the bottom to continue to the end of the card and to hide that seam I used another border that Joni sent in the kit.  I then put the pretty poinsettia's at the bottom and done!

Here are the final two:

On this card I used a stamp I purchased online of an owl isn't he cute!  The white on his hat is a distress marker, picket fence, doesn't it work well?  Then I cut a piece of the paper from the kit on an angle.  Shall I tell you I messed that up too?  I found a piece of paper in my stash that looked good alongside this one so cut that on an angle.  How could I make the same mistake twice you ask? You bet I did lol.  I fixed my little mistake with a piece of red solid cardstock that I put down then trimmed the ends so that I didn't mess that up.  The saying was in the kit.

I saved my favorite for last.  This adorable Santa image was in our kit.  I colored him with colored pencils then used some gold stickles in spots, which doesn't show in the picture, which added such a nice little glow then diecut it with the distressed Spellbinders die.  I used the border at the bottom of the card after using some red distress ink on my card base so it wasn't so white.  The Merry Christmas die cut was also in the kit and I simply outlined it and the Santa image with my favorite black pen which I bought at the Scarlet Lime store.

I hope you enjoyed my cards from this month and I thank you for stopping by. 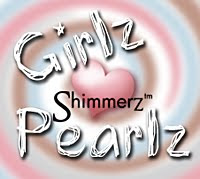